With reporting by Alex Garland

Activists seeking a halt on construction of the new King County’s Children and Family Justice Center brought their protest to the work site Monday morning.

The construction site protest blocked work entrances at the 12th and Alder site and marked what organizers said was the beginning of a “People’s Moratorium on construction at the site.”

“We have fought this fight on many fronts -– in the courts, in county and city council chambers, in the press, and on the streets,” one activist said in a statement posted by a coalition opposing the new facility. “At every point, the county has refused to listen, so today, we’re stopping the construction with our bodies.”

The announcement did not describe the group’s plans for continuing to block the work site gates. Some protesters were chained together. Inside the fences, some work continued. Police were at the site and monitoring the situation with more units being dispatched in the area. 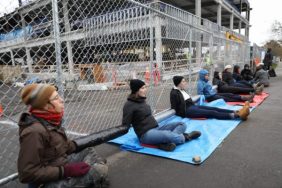 The protest was being broadcast live on the group’s Facebook page.

The action follows a protest earlier this month that targeted King County Executive Dow Constantine and the King County Administration building as activists blocked 4th Ave before clearing out in time for the afternoon commute — but not before raising the ire of Seattle commuter culture.

Construction of the project has continued despite a legal decision that thrust a major component of the center’s $200 million-plus budget into question. King County petitioned the state Supreme Court to review the decision, the Seattle PI reported last week, but the court has not yet said it will consider the case.

The new facility is under construction on the same campus as the existing juvenile justice center along 12th Ave about a block south of Seattle University. The county has been looking to replace the courthouse and administrative buildings for years and is building a new jail along with them.

The recession of 2008 held up plans for the expensive project, but the county passed a roughly $210 million levy in 2012. CHS reported here on the county’s efforts to show its changing approach to juvenile crime and justice. In 2016, the proportion of black youth in jail decline from 58.5% to 49.9%, county officials say. According to U.S. Census figures, about 7% of the county population is black and another 5% identified a multiracial.

King County plans for the new facility to be open by 2020.

I am aware of the activities at the Children and Family Justice Center, and I have read the recent correspondence from the No New Youth Jail Coalition. We continue to invite all those interested in youth welfare and juvenile justice to join a full dialogue with King County and our community partners as we do the difficult work to further reduce the number of youth in detention.

I do not believe keeping kids in the current decrepit and disrespectful facility is the right solution. Moving young people to adult jail also takes us in the wrong direction. In fact, I issued an Executive Order directing that all young people charged as adults be moved to the juvenile facility so that they can receive more age-appropriate services and programming.

While we complete the CFJC, we will continue to modify the new, smaller detention consistent with a public health approach to support youth and families before, during and after they are involved in the justice system. I have accepted an invitation to debate this issue on the Seattle Channel, and I look forward to a lively exchange of views.